Surendra Sai was born in 1809, in a small town Khinda about 21miles away from Sambalpur. Surendra Sai was a direct descendant from Madhukar Sai and therefore was legally entitled to be crowned as king of Sambalpur after demise of king Maharaja Sai in 1827. But he was not acceptable to the British power. Surendra Sai was a born rebel and an uncompromising enemy of the British Raj from his young age. His revolution against the British commenced from 1827 when he was only eighteen years of age and continued till 1862 when he surrendered and even after that, until he was finally arrested in 1864 – a total period of 37 years. He suffered imprisonment in Hazaribagh Jail for 17 years in course of his revolutionary career and after his final arrest for another term of 20 years including his detention of 19 years in the remote Asirgarh hill fort till he breathed his last there.

He was not only a great revolutionary throughout his life but also an inspiring leader of the people. Surendra Sai espoused the cause of the down trodden tribal people who were being exploitated by the higher caste Hindu and who became tools in the hands of the British for the establishment of their political power in Sambalpur. The aim of Surendra Sai was to drive the British out of Sambalpur. The Indian Revolution collapsed by the end of 1858 and law and order was restored by the British throughout India. But Surendra Sai could not be suppressed and he continued his revolution. The military resources of the British were pulled up against him and the brilliant Generals like Major Forster, Capt. L. Smith and others earned credit in suppressing the rebellion elsewhere in India were brought to Sambalpur to stamp out his revolution.

But all attempts failed and Surendra Sai succeeded in foiling the skill and strategy of the British for a long time. Major Forster, the reputed general who was vested with full military and civil power and the authorities of a Commissioner to suppress Surendra Sai and his followers, proved discredited and removed by the British authority in 1861 after three years of his services in Sambalpur. His successor Major Impey could realise the futility of military operation against Veer Surendra Sai.

He had no hesitation to declare that Surendra Sai was never defeated and would never be defeated. This remark of the Deputy Commissioner of Sambalpur shows the strength and greatness of Surendra Sai. In fact his glorious struggle after the supression of the Indian Revolution of 1857-58 against a vastly superior power for long four years is a unique achievement. The British not only seized the entire food-stock of the rebels but also stopped all resources of the supply of food and other necessaries of life for them. But that could not damp the fighting spirit of Surendra Sai.

Major Impey abandoned the idea of violent war and cautiously followed the policy of peace and good-will with the approval of the Government of India. Surendra Sai, one of the greatest revolution aries in history, and a warrior who knew no defeat in his life surrendered with full faith in the honesty and integrity of the British Government. But after the death of Impey situations took a sudden change and the British administrators revived their inimical attitude towards the great hero. Sambalpur was brought under the jurisdiction of the newly created Central Provinces on the 30th April, 1862, Surendra Sai decided to surrender soon after that. But he was very soon disillusiioned and the new set-up indulged in reversal of the old libeal policy. The administrators found that the lion did not cease to be a lion even after his Surrender.

The British Administrators were surprised to find that the surrender of Surendra Sai did not bring the revolution to an end. They stepped down to organise a conspiracy and made sudden arrest of Surendra Sai and all his relations, friends and followers. Veer Surendra Sai and six of his followers were subsequently detained in the Asirgarh hill fort. Veer Surendra Sai died on 23rd May 1884 in the prison of Asirgarh fort. But this valiant son of the soil would be remembered forever for his heroic activities. The great hero spent the last part of his life like Napolean in Saint Helena.

Thus, by passing of time Veer Surendra Sai lives in his glory as a great martyr. He fought almost single-handed against the most formidable forces of Imperialism, staking all that was near and dear to him and suffered untold miseries althrough his life.He was a Lion whom the British Empire could neither dare to kill nor to see moving freely on his soil.

WANTED : Female Tele Caller(Freelance) : Qualification-Graduation. The candidates must be well conversant in Odia and Hindi language. Their voice must be sweet and audible. Interested Candidates may send their bio-data along with the contact details to : info@matrimonyind.com 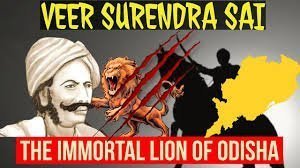